My first field camp was a disaster, and when the cyberpioneer Facebook page quizzed readers about interesting field experiences during their basic military training (BMT) I thought back to the week in February 2010, to the moments on Pulau Tekong when I felt like falling out and when I struggled to complete my shell scrape. Before enlistment my fitness was hardly a priority, so that eight-week physical training phase was no surprise. I was the only one in my junior college class. And while this additional time made future route marches as well as infantry exercises less taxing this first trip outfield was beyond exhausting.

It was the most exhausting National Service endeavour, until my reconnaissance course in Singapore and Taiwan. 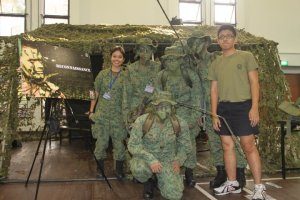 It was the most exhausting National Service endeavour, until my reconnaissance course in Singapore and Taiwan.

Most who have gone through the BMT field camp recall that letter with fondness. At the end of the gruelling five or six days, after recruits are put through a sequence of physical punishments, their commanders would then present each with a letter penned by their loved ones. I had tears in my eyes (and still have the letter, albeit with smudged letters and tattered sides), but I just remember how I was always pushed to my limits. At the end of the march to the first site I was drained, and – during a long briefing about fire movement – I remember thinking how easy it would be to lean back, collapse, and just fall out from the exercise.

It was worse on shell scrape day. It was blazing hot – perhaps code red or black – though for the first hour it was okay. From the beginning we had to don the utility outfit and a helmet as we shovelled away with the ET blade and stick, yet as the weather got hotter at noon we could just sling our rifle to the back while digging. It seemed like an impossible task. There was also the water conundrum: one had to remain hydrated (even if it was warm water in jerry cans baked in the sun), but drinking more meant more 30-minute roundtrips to the latrine. I laboured back and forth to do refills and relieve myself.

At the end of my BMT stint the commanders put together a montage of photographs from the four months, and my section mates chuckled when an image – of me sprawled across my half-complete shell scrape, rifle in arm – flashed on the screen.

Over the next few months my combat fitness did improve, and on a few occasions quite oddly enjoyed the times outfield. From a wet and humid night after a river crossing in Singapore to a freezing cold night after trekking kilometres in Taiwan there were many more uncomfortable moments, yet the first BMT episode stands out. It is ultimately an undertaking one is glad to have completed, and one wishes never to go through again.

A man of knowledge lives by acting, not by thinking about acting. Carlos Castaneda.
View all posts by guanyinmiao »
« Goodness Gracious, Singapore
Internships A Remedy To Uncertainty »