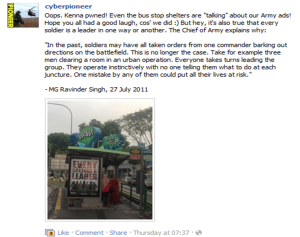 The CyberPioneer administrator came up with a creative response to the awkward juxtaposition of bus-stop advertisements.

The CyberPioneer FaceBook page is a coordinated effort introduced by the Singapore Armed Forces (SAF) to provide Singaporeans with more information about military events and various developments. In all fairness, the page has been a laudable effort by the Ministry of Defence (MINDEF), and is one most well-managed social media platform across the different ministries: for instance, the videos do provide valuable insights into life in camps, and the assortment of multimedia features do connect emotionally with event participants or servicemen in general. A lot of resources and manpower has been dedicated to ensure that CyberPioneer is keenly attuned to the nuances of social media and networking.

Credit should be given when it is due; I think its administrators used the page well to address the death hoax earlier this year (here), and the creative, rather tongue-in-cheek response to the awkward juxtaposition of bus-stop advertisements (right) was quite refreshing.

Nonetheless, I do feel that there is tremendous potential for more to be done by the MINDEF and the SAF to actively tap into present capacities and endeavours. Even though the FaceBook page was not intended for the processing of feedback per se, I believe it would be productive to heighten discourse on defence-related issues, and for participants – especially servicemen – to contribute to broad policy considerations.

– CyberPioneer should look into an expansion of its present functions, and to gather perspectives on a host of issues through notes or meaningful status updates. Beneficially, there could be the creation of focus group discussions – eventually translated into face-to-face exchanges – for interested individuals to provide opinions or commentaries.

CyberPioneer should look into an expansion of its present functions to gather perspectives on a host of issues.

There might be worries over confidential or classified information, and I recognise the sensitivities; however, it should not be perceived as a rigid, absolute impediment. First, broad concerns such as welfare, benefits, leadership, length of service et cetera merit attention, and can be included in public discourse. Second, constructively, the exchanges or interactions can serve as launch-pads for engagements within the units (here), for NSFs and NSmen to expound on pertinent concerns collectively.

– A quick look at the other MINDEF or SAF online platforms presents a very stark contrast: the forms and mechanisms for the processing of feedback are monotonous, mechanical and uninspiring, and provide little impetus for constructive contributions.

– Beyond the pedantic sharing of articles and official releases from the ministry, there should be the encouragement of suggestions and inputs from readers. The long-term problem with presenting everything in a prim and proper manner (with regard to the CyberPioneer FaceBook page) is the possibility that individuals – especially servicemen – could recognise that the gap between reality and perception yawns wide.

– The aforementioned can be complemented by formal inputs by regulars from the top-brass, or respective representatives, because their points could meaningfully value-add discussions. Minister for Defence Dr. Ng Eng Hen, at the current moment, has a special segment on the CyberPioneer page which details his general observations from events or general developments; unfortunately, the expositions or narratives are contrived, and provide insignificant food for thought.

These engagements could go a long way to involve and inspire; if they are taken seriously by the bureaucrats, it could encourage Singaporeans to be more forthcoming and positive with their recommendations, for serious improvements to be pondered.

A man of knowledge lives by acting, not by thinking about acting. Carlos Castaneda.
View all posts by guanyinmiao »
« Leadership Opportunities For NSFs (National Service Survey)
Curious Education Strategies In Singapore: What? Singapore’s Very Own “Homework Specialists”? »

3 thoughts on “The Military And Public Feedback: Expanding CyberPioneer’s Endeavours”