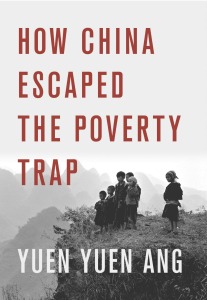 Since markets opened in 1978, and as China has lifted more than 500 million of its people out of extreme poverty, the three oft-cited theories to explain this phenomenon of extraordinary state-led growth are the modernisation theory (that economic growth leads to good governance), the theory about good institutions theory (that good governance leads to economic growth), and history as the cause of good governance or state capacity. These theories are alluded to – and dismissed too, since neither economic growth nor good governance is said to come first in development – in the beginning of Yuen Yuen Ang’s “How China Escaped the Poverty Trap”, because her central thesis is that successful development (in China) was the result of a co-evolutionary process, with states and markets interacting and adapting to each other.

More precisely, and in summary: “Poor and weak countries can escape the poverty trap by first building markets with weak institutions and, more fundamentally, by crafting environments that facilitate improvisation among the relevant players”.

Armed with about 400 interviews with Chinese officials, she takes a structured approach to explain the complex factors and conditions which account for the country’s broad and bold but geographically uneven growth. In her first chapters on methodology and her explanatory framework, Ang maps out the three elements of the adaptive logic: Variation (“how to strike a balance between flexibility and conformity, variety and uniformity” between central reformers and the local agents), selection (“how does the [Communist Party of China] state clearly define and reward success in the bureaucracy”, in the pursuit of different goals), and niche creation (“how regional diversity may be turned from a liability into a collective advantage”, given the diversity of conditions across China). The methodical choice of Chinese officials was not coincidental: She reasons that “something about China’s environment makes on-the-ground agents seem unusually inclined and able to adapt”.

Having established the logic, she prefaced her conclusions on the “meta-institutions that fostered adaptation in China’s political economy”: With variation, national leaders designed national reform packages and articulated policy directions (with varying degrees of clarity to exercise influence, not control, to deftly authorise and to delimit at the same time); with selection, the Chinese bureaucracy operated like a quasi-firm, with local leaders focused on the economic bottom-line and regular cadres on compensation (a “franchised” model which distinguishes these two sets of bureaucratic actors); and with niche creation, market forces initially prompting regional specialisation, and later coastal economies to invest in the inland ones (the crafting of meta-conditions “that empowered local agents to improvise solutions to particular contingencies specific to their locales and that evolved over time”). And in her elaboration of each, through individual chapters, Ang draws heavily from the perspectives of the officials from the three dissimilarly endowed regions of Blessed County, Forest Hill, and Blessed County, and expertly weaves in relevant data and information too.

The sign-postings and links between the chapters, in addition to the reiteration of key arguments, provided helpful clarity.

Criticisms of the three aforementioned theories and their methodologies – that they “capture only snapshots of long zigzag paths, zooming in on one causal direction” – are persistent. “Units of observation … cannot be characterised by snapshots taken only at certain points in time”, she added. “Rather, they are better characterised by their evolutionary trajectories over an extended period of time”. And having identified both the role of adaptive capacity, and its sources in meta-institutions, six general proposals were offered:

1. Delimit boundaries of experimentation and flexibility;
2. Activate incremental changes across connected domains simultaneously;
3. In the beginning, define success narrowly;
4. Give everyone a personal stake in the development process;
5. Let some get rich first but pair up the poor and the rich; and
6. Harness weak institutions to build markets.

“How China Escaped the Poverty Trap” is therefore one of best books I have read on China’s development into a middle-income country, primarily because it eschews the linear, causal explanations of how countries might escape the poverty trap. Such policy approaches in the development field should rightfully move away from best-practices toward “best-fit and localised approaches”. The book, however, feels more descriptive than prescriptive, and this is more evident in the final three examples – to show that the co-evolutionary process is not unique to China – of medieval Europe, the antebellum United States, and Nollywood, as well as the rather scant exposition on China’s challenges and potential trajectory out of the middle-income trap. Generally speaking still, it is hard to disagree with the two broad recommendations on constructing an adaptive environment – to foster the coevolution of states and markets – that poor and weak societies should first build markets with weak institutions, before creating the right conditions for adaptation.

A man of knowledge lives by acting, not by thinking about acting. Carlos Castaneda.
View all posts by guanyinmiao »
« 12 Years A SAP Student, And Nothing (Chinese) To Show For It
The Weekly Global Roundup: Oxfam’s Scandal In Haiti (February 19 to 24, 2018) »