Nassim Nicholas Taleb’s “The Black Swan: The Impact Of The Highly Improbable”

Posted by guanyinmiao ⋅ October 19, 2017 ⋅ 1 Comment
Filed Under  Nassim Nicholas Taleb, The Black Swan, The Black Swan: The Impact Of The Highly Improbable, The Book Club 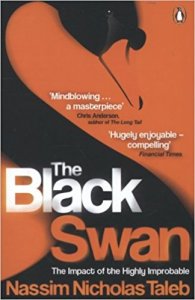 Central to Nassim Nicholas Taleb’s “The Black Swan: The Impact of the Highly Improbable” is a simple thesis: That we should build robustness to large surprise events – these fat tails with large impact – so as to “avoid being the turkey” who is surprised by the butcher at Thanksgiving. Look past Taleb’s acerbic wit and abrasiveness, especially towards academic fields or individuals he disagrees with, and even a novice reader like myself starts to think about uncertainty and randomness in different ways (and in particular too, like me, if you have had some academic training in public policy, statistics, and economics). It is not just that rare events are more frequent not possible to predict (“low predictability”), but also that their complexity and consequences matter too (“high impact”).

As he summarised: “Our world is dominated by the extreme, the unknown, the very improbable (improbably according our current knowledge). [There is] the need to use the extreme event as a starting point and not treat it as an exception to be pushed under the rug”.

Concepts of Mediocristan and Extremistan are, in this vein, important extensions to this thesis: In the former, the mediocre dominates, and “no single observation can meaningfully affect the aggregate”; in the latter, on the other hand, is where “the total can be conceivably impacted by a single observation”. The book is an acknowledgement, moreover, of the limits to human knowledge. “Measures of uncertainty that are based on the bell curve simply disregard the possibility, and the impact, of sharp jumps or discontinuities and are, therefore”, Taleb argued, “inapplicable in Extremistan”. Even so, there persists what he termed an “epistemic arrogance” in predictive activities.

Some of the themes across the four parts – chronologically, on psychology, on science and business, and on actionable steps – are not new. His argument of the expert problem and their arrogant attempts to predict and to eliminate volatility in life is echoed by political science writer Philip E. Tetlock (who is referenced), though Taleb perhaps takes one step further to question the assumptions undergirding these (futile) attempts. In addition to this empty-suit problem, readers of Richard H. Thaler and Daniel Kahneman (who is heavily referenced) should find the System 1 and 2 distinction and also the model of heuristics (study of shortcuts) and biases (arising errors) familiar.

There is a lot more that I yet do not understand in the book, and still his many criticisms were of concern to me, ahead of my PhD and my potential career in academia. The lesson on serendipity (and embracing disorder) seems like a useful first step. Likewise, his barbell strategy of “taking both a defensive attitude and an excessively aggressive one at the same time” can be actively applied too, together with an understanding of his four quadrants, which make distinctions between situations of simple and complex payoffs on one axis, and between Mediocristan and Extremistan on the other. Though slowly moving ahead with his advice of scepticism and humility seems productive too.

A man of knowledge lives by acting, not by thinking about acting. Carlos Castaneda.
View all posts by guanyinmiao »
« Speaker Tan Chuan-Jin Intends To Speak Up For Social Causes. Here’s How Research Can Help.
The Weekly Global Roundup: The Bleak Electoral Outlook In Africa (October 16 to 21, 2017) »