Planning a visit to the Italian city of Florence? Here are some recommendations*. To view all the photographs (with the captions in full) of the city, click on any image and navigate using the left and right keys.

1. The birthplace of the Renaissance, Florence is known for its history, culture, as well as art and architecture, evidenced by the many famous museums and art galleries in the city. Yet as a visitor, the number of heritage sites – and piazzas (public squares) – would also stand out. Locals would speak of the many stories associated with the piazzas and well-known personalities, and in the photograph is the Basilica di Santa Maria Novella (Church of Santa Maria Novella), the principal Dominican church of Florence. 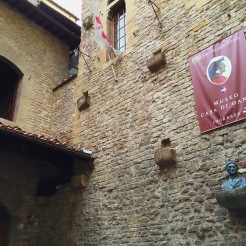 2. A short walk from the Basilica di Santa Maria Novella is an area alleged to be the houses of Durante degli Alighieri (Dante Alighieri), known as the Supreme Poet in Italy. Of his “Divine Comedy” I have read “Inferno” (https://guanyinmiao.wordpress.com/2010/10/16/dante-alighieris-inferno/), so I was looking for interesting artefacts or anecdotes in the house-museum. However, the exhibitions were far from engaging, documents too generic, and the displayed items were not interesting too. Not worth the four euros. 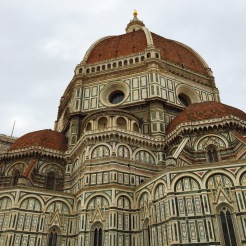 3. Another of the many piazzas in Florence is the Piazza del Duomo, where the Cattedrale di Santa Maria del Fiore (Cathedral of Saint Mary of the Flower), the Battistero di San Giovanni (Florence Baptistery), and Giotto’s Campanile are located. The cathedral is the main church of the city and had the largest brick dome ever constructed in the world. As one of the oldest buildings in Florence, the octagonal baptistery – which was undergoing refurbishment, so its bronze doors were not necessarily visible – stands across the cathedral. 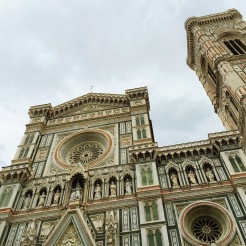 4. Giotto’s Campanile is a tower adjacent to the Cattedrale di Santa Maria del Fiore, one of two towers which are visible across Florence. All these buildings on the Piazza del Duomo are extremely popular with tourists, and even with pre-purchased tickets to the locations there are long lines which snake across the complex. The piazza is also crowded with peddlers and camera-toting tourists, with a number of souvenir shops and restaurants in the vicinity.

5. Across all Italian cities gelato (ice cream) is cheap and ubiquitous, so I had a crêpe with chocolate spread and pistachio gelato. Another food culture which is as popular as gelato is coffee, and in the many cafés and even restaurants we have patronised the locals come in for a quick cup of coffee at the bar, chatting briefly before going about with their day.

6. The Loggia dei Lanzi or Loggia della Signoria is a building located at the corner of the Piazza della Signoria, and with its wide arches it is an open-air gallery of antique and Renaissance sculptures. Two of these are the ancient pair of Medici lions, which have been copied in countries around the world. Behind this building is the Galleria degli Uffizi (Uffizi Gallery), one of the oldest art museums in the world.

7. A 15- to 20-minute stroll away is the Basilica di Santa Croce (Basilica of the Holy Cross), the principal Franciscan church in the city. As most visitors should already be accustomed to, the church is located at the Piazza di Santa Croce, and because it is the burial location of many illustrious Italians – such as Renaissance sculptor Michelangelo – it is also known as the Tempio dell’Itale Glorie (Temple of the Italian Glories).

8. Built over the Arno river – which used to flood Florence in historical times – the Ponte Vecchio (Old Bridge) has been rebuilt multiple times. The main river in Pisa is also the Arno river.

9. Situated on the other side of the Arno river is the Palazzo Pitti (Pitti Palace). It was the chief residence of the ruling families of the Grand Duchy of Tuscany and subsequently the power base of Napoleon, but is now the largest museum complex in Florence. The palace was purchased by the Medici family, a banking and political dynasty which gathered much power in the city in the past.

10. It takes about 30 minutes to reach the Piazza Giuseppe Poggi, from which another 20 minutes is needed to trek uphill to the Piazzale Michelangelo (Michelangelo Square). In the heat the journey up may be exhausting, though at the top visitors are rewarded with a panoramic view of the city. From the many observation points, it was interesting to identify the different landmarks of the city, by cross-referencing to a tourist map. Since the location is dedicated to Michelangelo, there is a bronze cast of the biblical hero David in the middle of the vantage point. 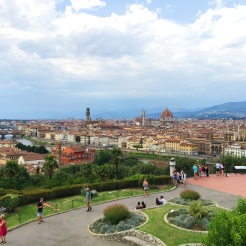 11. Panoramic view of Florence from the Piazzale Michelangelo.

12. The bistecca alla Fiorentina (T-bone steak) is found everywhere in Florence, and it is usually served rare. The portion was huge, and in this restaurant the steak was grilled over charcoal. Served with a glass of chianti, it was a delightful dining experience for dinner in the evening, and we even had room for the desserts tiramisu and chocolate mousse.

13. We made a day trip to the city of Pisa and the villages of Cinque Terre, two UNESCO World Heritage Sites. At the famous Piazza dei Miracoli in Pisa, the Leaning Tower is often the focus for visitors, but the Baptistery – in fact the largest in Italy, made of marble – is a grand structure. There is also the Camposanto (Holy Field), which was the burial place of the upper class in the city for centuries. A small fee must be paid to enter these two locations.

14. It took 334 years to complete the Leaning Tower of Pisa, and the tilt began during its construction as a result of the inadequate foundation on ground which was too soft. At 55.86 metres, there have been efforts to stabilise the structure, and while the tickets to the top are not cheap it was a good experience climbing up the tower. Besides the great views and the cool breeze, walking up is quite the experience because the centre of gravity is not consistent with the angle of the steps.

15. Views of Pisa and the Cathedral (visit to the majestic interior, with a great ceiling, is free), from the top of the Leaning Tower.

16. A collection of five cliff-side towns, we started our journey across Cinque Terre at the southern-most town of Riomaggiore, known for its narrow streets and many quaint dining establishments. We had a small lunch of cold cuts and cheeses, bread, as well as white wine. The five towns are connected by trains (which we used), hiking routes, and boats, and each is known for their respective specialities. Cinque Terre has a coastline of 18 kilometres, and as a national park the area has also been modified for sustainable tourism.

17. We travelled next to the town of Vernazza, where we scaled the remains of the medieval Castello Doria for a bird’s eye view. There are two clock towers, many restaurants and shops along the main street, and the town is known for its beach area, which draws swimmers, sunbathers, and anyone who wants to catch some sun.

18. On the left is a cone of fried seafood, including mussels, prawns, round fish cakes, and calamari, and on the right – of course – is gelato.

19. The most common photograph of Cinque Terre, taken at the town of Manarola, described as a tiny urban jewel with small, colourful houses in the Genoese style.

* Not an advertisement, and also not sponsored (unfortunately).

A man of knowledge lives by acting, not by thinking about acting. Carlos Castaneda.
View all posts by guanyinmiao »
« Tour Guides Must Embrace Digitisation
Diverse Singapore Conversations »