Planning a visit to the Italian city of Milan? Here are some recommendations*. To view all the photographs (with the captions in full) of the city, click on any image and navigate using the left and right keys.

1. A UNESCO World Heritage site, the Santa Maria delle Grazie (Church and Dominican Convent of the Holy Mary of Grace) contains the mural painting “The Last Supper”, by painter and sculptor Leonardo da Vinci. Even though I did get lost, the location is but a short walk from a nearby metro station, and entrance into the church is free.

2. For many who have visited grand European churches or cathedrals, this Gothic brick church in Milan may not be as spectacular, and would resonate more strongly with believers. There are smaller chapels on both sides of the Santa Maria delle Grazie, and while the general interior is relatively simple, there are also intricate sculptures and designs. 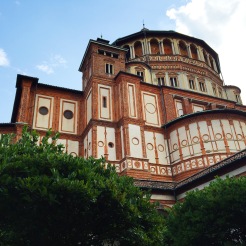 3. From the courtyard one will get a good view (as well as photographs) of the massive six-sided dome, designed in an early Renaissance style. Temporary exhibitions are common too. 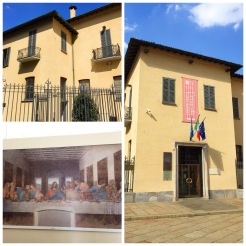 4. “The Last Supper” is contained not in the church itself, but in the adjoining rectory. The ignorant me thought that it was a canvas painting, though because the work has been studied and copied extensively the misperception is not uncommon. The masterpiece, arguably da Vinci’s most famous, has gone through a lot – bombings during the Second World War, when it was sandbagged, wear and tear, as well as the weather – and has deteriorated and flaked despite major restoration. Tickets must be reserved way in advance (unless one travels with a tour), and the 15-minute stay feels necessary before the painting is gone for good.

5. Built as a fortress and enlarged as a citadel centuries ago, the Castello Sforzesco (Sforza Castle) now houses art collections and museums of Milan. Across the compound the emblems of the city – a red cross on a white background, as well as the Bissa or Biscione, an azure serpent consuming a human child – can also be seen.

6. The city of Milan is hosting Expo 2015, with the theme “Feeding the Planet, Energy for Life”, which seems relevant with the ongoing discussions on the Sustainable Development Goals in the United Nations. To celebrate this Universal Exposition, banners displaying the flags of all the participating countries are hung along the main shopping district. 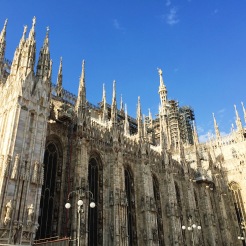 8. It took five centuries for the façade of Il Duomo to be completed, and the cathedral is adorned with stone pinnacles, thousands of marble statutes, and while marble. Because of its prominence and beauty, the outside is often crowded with pigeons, tourists, and peddlers. It costs two euros to enter the cathedral, eight to head up to the rooftop on foot.

9. The two euros to enter the cathedral are well worth the expense. One can expect to spend up to an hour admiring the many features and artefacts in the interior of Il Duomo. The gigantic pillars are impressive, leading one to wonder how they were hoisted in the past.

10. View of the interior of Il Duomo.

11. The cathedral also houses the largest stained-glass windows in the world. There are three large panels of windows. Because many in the city were illiterate in the many, the beautiful illustrations illuminated by natural light were used to depict stories from the Bible.

12. A pizza dinner at Spontini, a short walk from Il Duomo. There are only three types of pizzas – baked in wood-burning ovens – available, and I had the delicious prosciutto one.

13. Built in 1865 and completed in 1877, the Galleria Vittorio Emanuele II is a large shopping arcade. With its luxury shops, glass ceilings and domes, and delightful architecture consisting of iron and glass, the salon may have inspired similar locations around the world, such as the Marina Bay Sands shopping district in Singapore.

14. In the centre of the Galleria Vittorio Emanuele II, there are tile insignias of four prominent Italian cities of the North, including Milan. One of them is the insignia of Turin – a rampant bull – and it has been said that individuals will be blessed with good luck, if they twirl around on their heels three times on the testicles of the bull on the floor. Over time, there is now an obvious hole for the twirls to be completed. 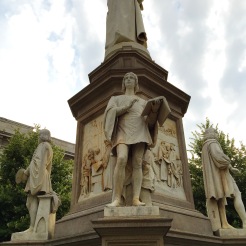 15. While Leonardo da Vinci was not born in the city, he spent much of his earlier working life in Milan, where he produced “The Last Supper”. To honour the talented man there is a central monument in the Piazza della Scala, in front of the La Scala theatre. 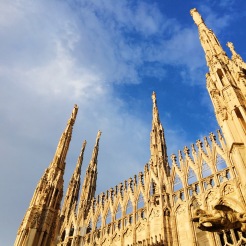 16. After a long flight of stairs up Il Duomo, there are two levels on the rooftop. One can also take an elevator up (at a higher price), but a little exercise is always good.

17. Right at the top of the cathedral is the Madonnina spire, a golden statue of the Virgin Mary. According to tradition, since it provides divine protection and literally overlooks the city, no building in Milan should be higher than the Madonnina.

18. I was up at the rooftop during the sunset. On both sides of the cathedral there are panoramic views of the city, and on a clear day – which I enjoyed – the landscape of Milan can be observed, and in the distance the Italian Alps can also be seen.

19. Another view from the rooftop of Il Duomo.

* Not an advertisement, and also not sponsored (unfortunately).

A man of knowledge lives by acting, not by thinking about acting. Carlos Castaneda.
View all posts by guanyinmiao »
« Missing In The Election Discourse: The Economy
Look Deeper And Further Into History »